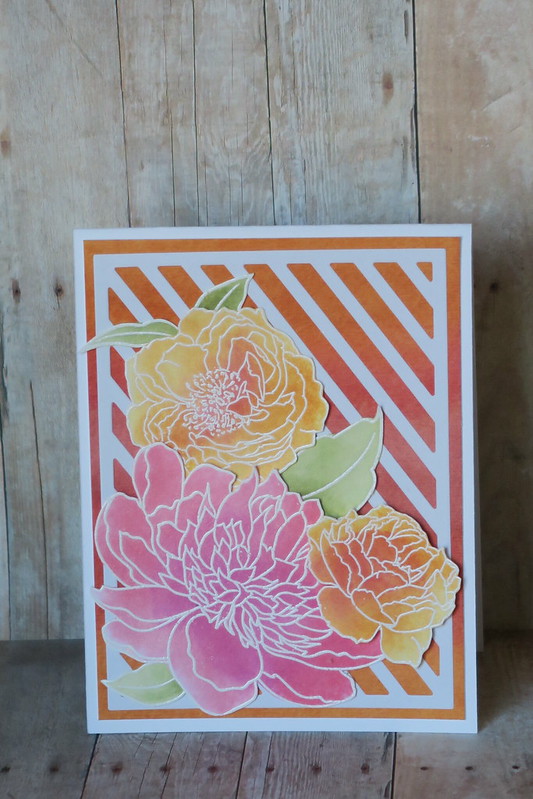 I am really liking how this card turned out. Somewhat different for me mainly because of the background. The main background piece is a watercolor piece I had laying around. The next part is a die cut from a Richard Garay die. I like the diagonal stripes and it adds some interest to the background. The flowers are my favorite part. I also had them done quite some time ago. You know that pile of stuff you are going to use some day. The two sets I used for the flowers and leaves is The Ton Large Peony and WPlus9 Modern Peonies. These two go together so nicely.  I heat embossed the flowers and leaves using white powder.  If I remember correctly I colored these with Zig Clean Color or maybe Copics. I don’t have the card anymore to look at. What I do know is the flowers and leaves have a lot of shimmer on them from Sheer Shimmer Spritz the Sparkle one. 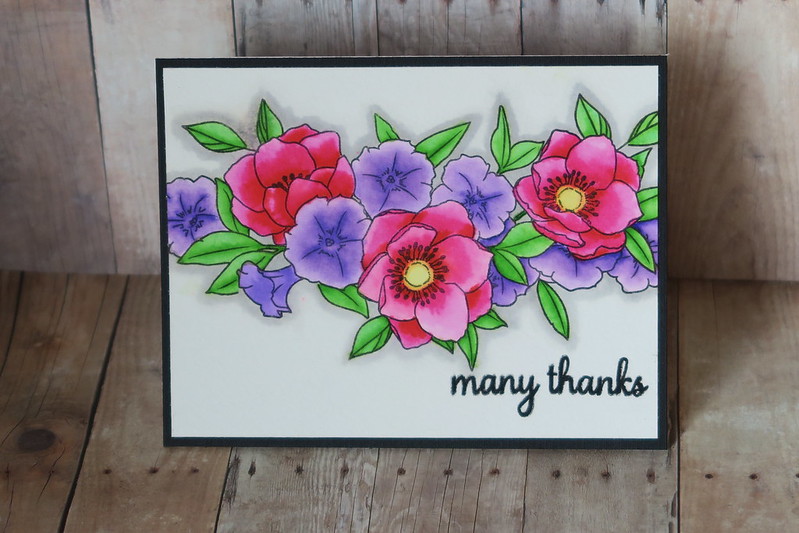 I finally took some time with this gorgeous WPlus9 stamp Kind Soul.

The flowers – I watercolored the flowers on watercolor paper with Zig Clean Color pens and a water brush. I need to get some more of the Zig pens! I did one group at a time and let it dry in between. So pink flowers, then purple flowers then leaves, then the shadow. This is the first time I colored around an image. I think it looks great when people do it but I was afraid to mess up an image I just colored. So I used I think a light gray Zig pen. It came out pretty good for the first try. It could probably be a bit less of a precise outline but I really like how it turned out.

The sentiment is from Hero Arts set Thanks a Bunch (CL663). I used Versafine Onyx black but on the watercolor paper it wasn’t very bold so I stamped over it so there is a bit of a shadow. 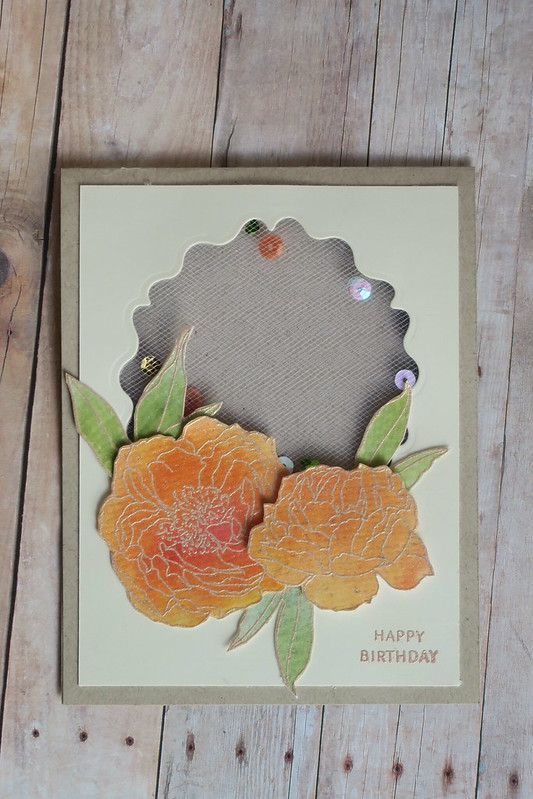 I have been wanting to try this tulle shaker technique for quite some time. I saw this on Jennifer McGuire’s website. My card looks a lot like hers but I was not trying to copy her exact card. It was the technique I wanted to try and I happened to use similar flowers because I had them colored and liked them. My sequins don’t show that much but they are in there.  It is a fun and fairly easy way to make a shaker card. I am not a fan of cutting all the little pieces of foam tape to keep the sequins from escaping so this was a nice solution.

For the hole where the tulle and sequins go I cut that with a Spellbinders die Peony (S4-193). You glue down some tulle over the hole on the backside, drop in some sequins, glue another piece of tulle on then glue it to the base of the card. Some of the sequins in there looked clear but when I added them they were kind of iridescent and kind of didn’t go with the card but I let it be.

The flowers, leaves and sentiment is stamped in Rose Gold embossing powder on watercolor paper and colored with either Copics or Zig Clean Color pens. The stamp set is a nice one from WPlus9 called Modern Peonies. I also sprayed the flowers and leaves with Shimmer Spritz or Perfect Pearls. Whichever it is the shimmer is really nice. I guess that’s what happens when you wait so long to post, you forget what you used sometimes. I also don’t ever think to write it down.

This is the results of the four cards I entered at this years Alameda County Fair. I did win some money but it is all really for the fun of doing it.

It is that time of year again for our county fair. It is the Alameda County Fair and it starts in just under a month. Kind of fun this year they are having a cattle drive down the main street of the town where the fairgrounds are. Let me just say I do not live in a rural area. This is the first time they are doing this and I want to go check this out.

So last year my son suggested that I enter some of my cards at the fair so I entered two last year. This year I got more ambitious and entered four. I picked 4th of July, Sympathy, Birthday, and a Thank You card. At the same time as I was creating the cards starting about 2 weeks ahead of time the OCC Sparkle and Shine class was going on so there was a tiny bit of overlap but also it took a lot of my time to come up with so many cards in a short period of time. And.. I only did 2 days of the 6 days of classes. You know when they are going to be on display at the fair you have to be more picky. So you know how that goes. Try something it doesn’t look right, sleep on it, try another combination of things and on it goes. Finally you get them done.

Here they are all together.

And here we go with the details on each card.

I created the watercolor background some time back and finally put it to use. I stamped the flowers using Hero Arts stamp Blooming Meadow (CG171). I die cut the scalloped oval with a Spellbinders die Big Scalloped Ovals (S4-251). The tree is cut with Memory Box die Small Alder Tree (98792). The greeting is from a somewhat new set to me by Altenew called Painted Greetings.

This one took several passes before I got the look I liked. Seems like a simple card but it took a bit to get there. The background is Neenah Desert Storm paper which I was waiting for from a recent order from Simon Says Stamp. I have not had any of it before. The fireworks are stamped and heat embossed with Hero Arts stamp Fireworks (D5999)(strange name ha). I used Ranger Red Tinsel embossing powder which has some glitter in it but it doesn’t show to much in the photo. The sentiment is heat embossed using a Hero Arts stamp from the set Celebrate Everyday (CL498). The stars is a die from Simon Says Stamp called Star Parade (S227). I cut it out three times from a paper pad by Authentique. The die cuts the outline and the stars/partial stars. So I laid them all out and put various patterns back in.

This was a fun one! I just got this die set that cuts the card back and front, the heart panel and hearts and the thank you. This is a card that worked for the OCC class Sparkle and Shine and for the fair. So you cut out the back and front at once from a long piece of paper. The die is by Sizzix/Stephanie Bardnard called Thank You Drop-in. Then I cut out the white panel with the hearts. I also used that panel part to cut out some colorful hearts from the Lawn Fawn plaid paper pad. I glued the hearts back in some of the open spots. The Thank You is where the OCC Sparkle and Shine came in.  The first day was all about glitter. I used some glitter paper with the ultra fine glitter on it already. It was white so I colored with Copics to match my card and cut the Thank You out with the die that comes with the set.

And here is the last but not least. As you can see it’s a floral birthday card which is one of my favorites to make. For the background I used an embossed white piece of paper from a DCWV paper pad I got on sale. I inked over it with some Quick Quotes ink. I love this ink for when you are looking for a more subtle chalky look. The panel behind the flowers is cut with a Lawn Fawn die Stitched Journaling Card.  The flowers and leaves are from a brand new set to me from WPlus9. Actually they are from 2 sets Modern Peonies and Modern Anemones. I heat embossed all the leaves and flowers on watercolor paper using brass embossing powder. I then painted them in with Oxide inks that I put down on my mat and watered down and also did some mixing them together. I used Spiced Marmalade, Worn Lipstick, Fired Brick and Peeled Paint. I also did fussy cutting and the largest flower is raised using foam tape. The sentiment is from a somewhat new set to me also by Altenew called Painted Greetings using the same brass embossing powder and heat embossing.

This is a pretty lengthy post wouldn’t you say. If you read all the way to the bottom or skimmed to the bottom.. let me know which card you like best.

This card was created for a male’s birthday.

The feathers are from WPlus9 set called Fanciful Feathers. There are a couple different sizes of feathers and 4 different patterns in the set and a couple tiny ones. I really like the set but sometimes I can’t quite figure out what to do with the feathers. For this I used my Misti if I recall it right. There is something to be said for writing up and posting not long after you make your card. As you can see I just altered the direction and colors of ink stamping the feathers on gray paper. The greeting is on dark blue paper and embossed with silver.