Howdy! Such a cold winter this year. I hope you all are keeping warm in your crafty spaces. I have a card today using digital images, colored pencils and a stencil. I was inspired by the mood board for the a2z Scrapbooking monthly challenge. For the details about my card check out my post over at a2z Scrapbooking. 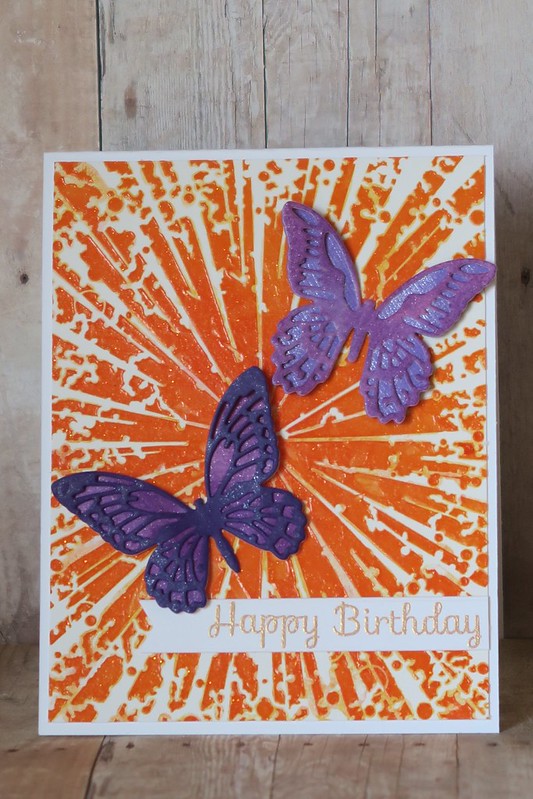 This was a fun one to make. Along the way I made several combinations of butterflies and a few greetings. Finally it came together and I am really happy with it.

The background – Memory Box stencil Brilliant which is a bit challenging to work with because of all the small pieces that come to the center. I used clear embossing paste mixed with ink sprays by Heidi Swapp and Ranger. I also sprinkled in some Art Glittering System ultra fine glitter in Oyster which is a very cool color. I just ran into this in my stash and have had it for a very long time.

The butterflies – I used a Sizzix Tim Holtz die set called Mini Detailed Butterflies. I first water colored with purples and cut out some butterflies. I decided I wanted the underneath layer to vary so one is cut from just a light purple card stock. The top detailed part of the butterflies I first cut out of black card stock. Nope didn’t work for me. Then I took out the purple paper. Yes that works. I colored over all the butterfly pieces with a Spectrum Noir sparkle pen (I don’t remember the exact name). Then came the greeting. Black with white embossing? No. White with black embossing. No. Finally I got to this one using a Lawn Fawn die Everyday Sentiment Banners, Rose Gold Embossing Powder by Stampendous, the sentiment from I think it is a Simon Says Stamp set and of course I can’t find the package right now.

Here is a twist on the card above. 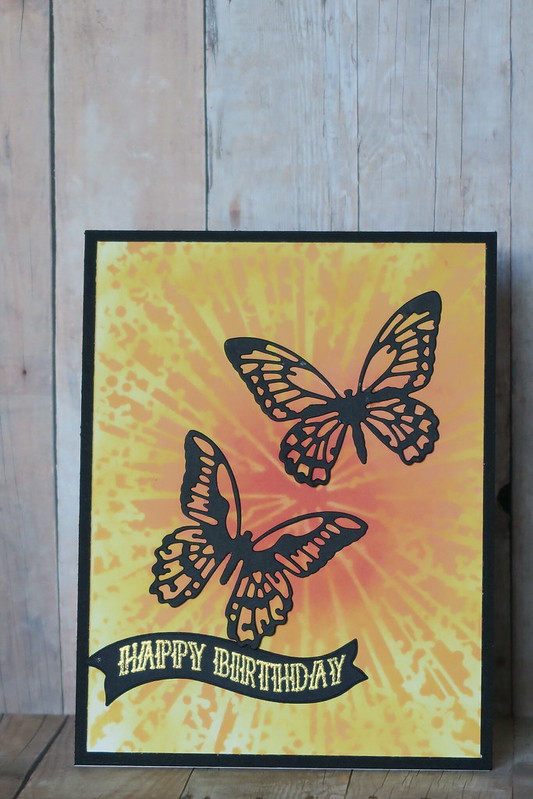 For this background I blended Distress Oxide inks. The same butterflies are cut from black paper and not layered. The sentiment is from a My Monthly Hero set from March 2016. I die cut the banner from this set and then stamped the greeting with a Avery Elle pigment ink in a orange/yellow color and then sprinkled Judikins Translucent Gold embossing powder over it and heat embossed it. I tried so many combinations of things for that greeting from different color embossing powders to different greetings and dies. Finally it worked out. 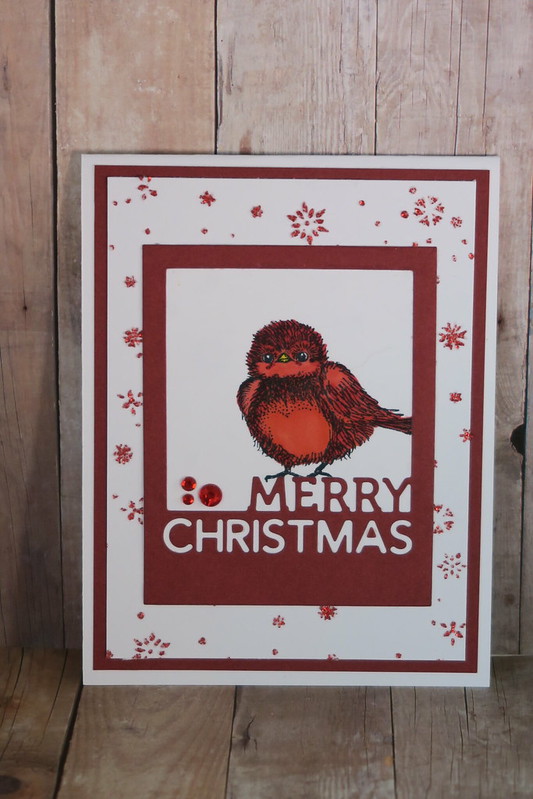 After making the blue card I liked it a lot and decided to make a red version. I used a different stencil for the background and added red glitter to the embossing paste. The stencil is a Memory Box stencil called Tiny Snowflakes (88583). 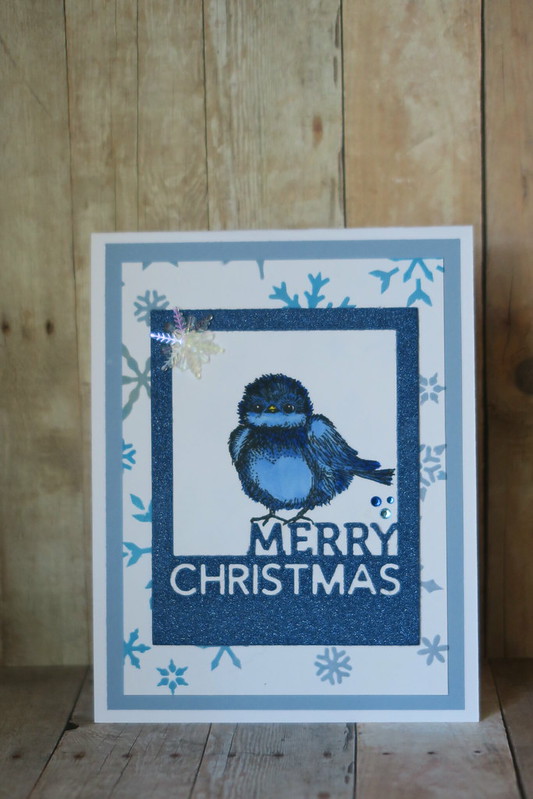 Merry Monday’s theme this week was a tag on a card with texture, bling and die cuts.

Well I finally got it together to make a card for Merry Monday at the last hour, which I haven’t done in quite awhile. That was all great and I was running on time. But then.. when I went to post it I remembered I forgot one element of the theme. Um where’s the tag on my card? Does that ever happen to you? Darn it. The good news is I really like the card and I got a Christmas card done. So the inspiration for this card was the Merry Monday Challenge for this past week.

Frame – Simon Says Stamp die Holiday Frames (SSSD111393) cut out of the nice DCWV Glitzy Glitter paper. I love the smooth texture of this paper. It is a challenge somewhat though to cut out things with dies. The backing is thick so you have to work to get the small pieces out. I even rolled it through the Grand Calibur more than once and added a paper shim. I did get there though.

The bird is a stamp by Judikins called Whats Up Chickadee that I got a few months ago and finally used. I colored it with Copics and went over that with a Spectrum Noir Sparkle pen.

So as you can see I have the bling, a die cut and the texture on the background. Oops no tag… 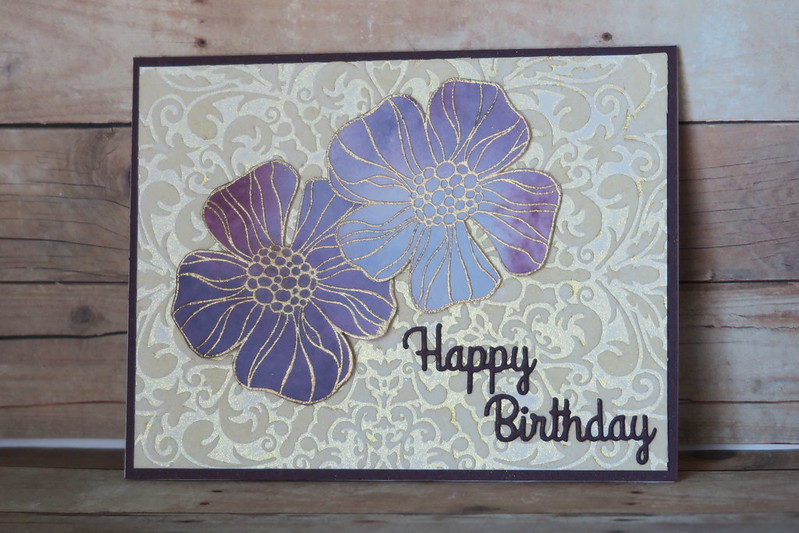 This card was made from digging through all my saved stuff.

The background was made using a Memory Box stencil named Pattern Lanthenay and some embossing paste. After it dried I sprayed it with gold Color Shine. Since I have been playing around trying things much more I think I need to write on the back of things about how I did it so I can explain it down the road. Sometimes I don’t remember all the details.

The flowers are embossed using gold powder on a piece of paper I had with some purple on it which is probably Distress ink but I’m not sure. The flower stamp Small Striped Flower (CG256) is by Hero Arts.

Underneath the embossed panel is a dark purple paper which looks black in the photo. I also used that same paper to cut out the sentiment with a Spellbinders die from the Sentiments One (S2-082) set.